What is typhoid fever?

Typhoid fever is caused by S. enterica serovar Typhi (S. Typhi), a gramnegative bacterium. A very similar but often less severe disease is caused by Salmonella Paratyphi A and rarely by S. Paratyphi B (Schotmulleri) and S. Paratyphi C (Hirschfeldii).

What is the pathogenesis of typhoid? 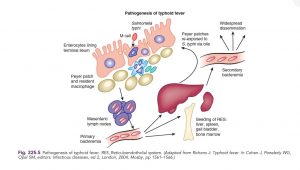 What are the clinical signs?

T he presentation of typhoid fever may also differ according to age. Although data from South America and parts of Africa suggest that typhoid may manifest as a mild illness in young children, presentation may vary in different parts of the world. There is emerging evidence from South Asia that the presentation of typhoid may be more dramatic in children <5 yr old, with comparatively higher rates of complications and hospitalization. Diarrhea, toxicity, and complications such as disseminated intravascular coagulation (DIC) are also more common in infancy, resulting in higher case fatality rates. However, some of the other features and complications of typhoid fever seen in adults, such as neurologic manifestations and

GI bleeding, are rare in children. Typhoid fever usually manifests as high-grade fever with a wide variety of associated features, such as generalized myalgia, abdominal pain, hepatosplenomegaly, and anorexia (). In children, diarrhea may occur in the earlier stages of the illness and may be followed by constipation. In the absence of localizing signs, the early stage of the disease may be difficult to differentiate from other endemic diseases, such as malaria and dengue fever.

In approximately 25% of cases, a macular or maculopapular rash (“rose spots”) may be visible around the 7th-10th day of the illness, and lesions may appear in crops of 10-15 on the lower chest and abdomen and last 2-3 days (    ??). These lesions may be difficult to see in dark-skinned children. Patients managed as outpatients present with fever (99%) but have less emesis, diarrhea, hepatomegaly, splenomegaly, and myalgias than patients who require hospital admission.

What are the complications? 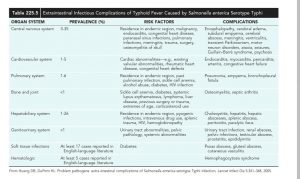 How the DIAGNOSIS is made?

The mainstay of the diagnosis of typhoid fever is a positive result of culture from the blood or another anatomic site. Results of blood cultures are positive in 40–60% of the patients seen early in the course of the disease, and serial blood cultures may be required to identify Salmonella bacteremia.

Stool and urine culture results may become positive after the 1st wk. The stool culture result is also occasionally positive during the incubation period. The sensitivity of blood cultures in diagnosing typhoid fever in many parts of the developing world is limited. Wide-spread liberal antibiotic use may render bacteriologic confirmation even more difficult.

Bone marrow cultures may increase the likelihood of bacteriologic confirmation of typhoid and may provide a diagnosis for patients with classic fever of unknown origin caused by Salmonella. Still, collection of bone marrow specimens is difficult and relatively invasive.

T he classic Widal test measures antibodies against O and H antigens of S. Typhi but lacks sensitivity and specificity in endemic areas. Because many false-positive and false-negative results occur, diagnosis of typhoid fever by Widal test alone is prone to error. Other relatively newer diagnostic tests using monoclonal antibodies have been developed that directly detect S. Typhi–specific antigens in the serum or S. Typhi Vi antigen in the urine. However, few have proved sufficiently robust in large-scale evaluations.

A nested polymerase chain reaction (PCR) analysis using H1-d primers has been used to amplify specific genes of S. Typhi in the blood of patients; it is a promising means of making a rapid diagnosis, especially given the low level of bacteremia in enteric fever.

What is the treatment?

Which are thr typhoid vaccine?

• Vaccination schedule:–Vi-PS (polysaccharide) vaccines: Single dose at 2 years; revaccination every 3 years (no evidence of hyporesponsiveness on repeated revaccination so far).–

Vi-PS conjugate (Typbar-TCV®): Single dose at 9–12 months and a booster during second year of life.–Vi-PS conjugate vaccine (PedaTyph®): There are study design issues with a single large study done. Further data needed specially on number of doses. Available data not sufficient and does not justify recommendation for routine use. Catch-up vaccination:

• Recommended throughout the adolescent period, i.e. till 18 years.