What is cerebral palsy?

Cerebral palsy (CP) is a diagnostic term used to describe a group of permanent disorders of movement and posture causing activity limitation that are attributed to nonprogressive disturbances in the developing fetal or infant brain. The motor disorders are often accompanied by disturbances of sensation, perception, cognition, communication, and behavior as well as by epilepsy and secondary musculoskeletal problems

What is spastic diplegia?

Spastic diplegia is bilateral spasticity of the legs that is greater than in the arms. Spastic diplegia is strongly associated with damage to the immature white matter during the vulnerable period of immature oligodendroglia between 20-34 wk of gestation. However, approximately 15% of cases of spastic diplegia result from in utero lesions in infants who go on to delivery at term.

The first clinical indication of spastic diplegia is often noted when an affected infant begins to crawl. The child uses the arms in a normal reciprocal fashion but tends to drag the legs behind more as a rudder (commando crawl) rather than using the normal 4-limbed crawling movement. If the spasticity is severe, application of a diaper is difficult because of the excessive adduction of the hips. If there is paraspinal muscle involvement, the child may be unable to sit.

Examination of the child reveals spasticity in the legs with brisk reflexes, ankle clonus, and a bilateral Babinski sign. When the child is suspended by the axillae, a scissoring posture of the lower extremities is maintained. Walking is significantly delayed, the feet are held in a position of equinovarus, and the child walks on tiptoe. Severe spastic diplegia is characterized by disuse atrophy and impaired growth of the lower extremities and by disproportionate growth with normal development of the upper torso.

The prognosis for normal intellectual development for these patients is good, and the likelihood of seizures is minimal. Such children often have learning disabilities and deficits in other abilities, such as vision, because of disruption of multiple white matter pathways that carry sensory as well as motor information.

T he most common neuropathologic finding in children with spastic diplegia is periventricular leukomalacia (PVL), which is visualized on MRI in more than 70% of cases. MRI typically shows scarring and shrinkage in the periventricular white matter with compensatory enlargement of the cerebral ventricles.

However, neuropathology has also demonstrated a reduction in oligodendroglia in more widespread subcortical regions beyond the periventricular zones, and these subcortical lesions may contribute to the learning problems these patients can have.

MRI with diffusion tensor imaging is being used to map white matter tracks more precisely in patients with spastic diplegia, and this technique has shown that thalamocortical sensory pathways are often injured as severely as motor corticospinal pathways

Infants with spastic hemiplegia have decreased spontaneous movements on the affected side and show hand preference at a very early age. The arm is often more involved than the leg and difficulty in hand manipulation is obvious by 1 yr of age.

Walking is usually delayed until 18-24 mo, and a circumductive gait is apparent.

Examination of the extremities may show growth arrest, particularly in the hand and thumbnail, especially if the contralateral parietal lobe is abnormal, because extremity growth is influenced by this area of the brain.

Spasticity refers to the quality of increased muscle tone, which increases with the speed of passive muscle stretching and is greatest in antigravity muscles. It is apparent in the affected extremities, particularly at the ankle, causing an equinovarus deformity of the foot. An affected child often walks on tiptoe because of the increased tone in the antigravity gastrocnemius muscles, and the affected upper extremity assumes a flexed posture when the child runs. Ankle clonus and a Babinski sign may be present, the deep tendon reflexes are increased, and weakness of the hand and foot dorsiflexors is evident. Difficulty in selective motor control is also present.

About one third of patients with spastic hemiplegia have a seizure disorder that usually develops in the first year or two;

MRI is far more sensitive than cranial CT scan for most lesions seen with CP, although a CT scan may be useful for detecting calcifications associated with congenital infections.

What is spastic quadriplegia?

Spastic quadriplegia is the most severe form of CP because of marked motor impairment of all extremities and the high association with intellectual disability and seizures. Swallowing difficulties are common as a result of supranuclear bulbar palsies, often leading to aspiration pneumonia and growth failure.

The most common lesions seen on pathologic examination or on MRI scanning are severe PVL and multicystic cortical encephalomalacia.

Associated developmental disabilities, including speech and visual abnormalities, are particularly prevalent in this group of children. Children with spastic quadriparesis often have evidence of athetosis and may be classified as having mixed CP.

What is dyskinetic cp?

T he term dystonia refers to the abnormality in tone in which muscles are rigid throughout their range of motion and involuntary contractions can occur in both flexors and extensors leading to limb positioning in f ixed postures. Unlike spastic diplegia, the upper extremities are generally more affected than the lower extremities in extrapyramidal CP. Feeding may be difficult, and tongue thrust and drooling may be prominent.

Speech is typically affected because the oropharyngeal muscles are involved. Speech may be absent or sentences are slurred, and voice modulation is impaired. Generally, upper motor neuron signs are not present, seizures are uncommon, and intellect is preserved in many patients. This form of CP is also referred to in Europe as dyskinetic CP and is the type most likely to be associated with birth asphyxia. In the European CP study, 76% of patients with this form of CP had lesions in the basal ganglia and thalamus.

Extrapyramidal CP secondary to acute intrapartum near-total asphyxia is associated with bilaterally symmetric lesions in the posterior putamen and ventrolateral thalamus. T hese lesions appear to be the correlate of the neuropathologic lesion called status marmoratus in the basal ganglia.

Athetoid CP can also be caused by kernicterus secondary to high levels of bilirubin, and in this case the MRI scan shows lesions in the globus pallidus bilaterally.

Extrapyramidal CP can also be associated with lesions in the basal ganglia and thalamus caused by metabolic genetic disorders such as mitochondrial disorders and glutaric aciduria. MRI scanning and possibly metabolic testing are important in the evaluation of children with extrapyramidal CP to make a correct etiologic diagnosis.

What are the aetiology 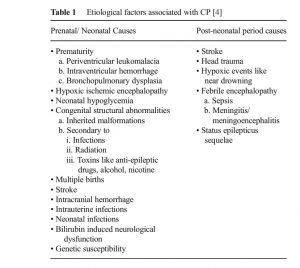 What are the associated anomalies? 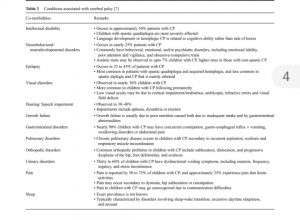 What are the investigations? 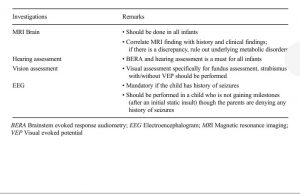 A thorough history and physical examination should preclude a progressive disorder of the CNS, including degenerative diseases, metabolic disorders, spinal cord tumor, or muscular dystrophy. The possibility of anomalies at the base of the skull or other disorders affecting the cervical spinal cord needs to be considered in patients with little involvement of the arms or cranial nerves.

Genetic evaluation should be considered in patients with congenital malformations (chromosomes) or evidence of metabolic disorders (e.g., amino acids, organic acids, MR spectroscopy). In addition to the genetic disorders mentioned earlier that can present as CP, the urea cycle disorder arginase deficiency is a rare cause of spastic diplegia and a deficiency of sulfite oxidase or molybdenum cofactor can present as CP caused by perinatalasphyxia.Tests to detect inherited thrombophilic disorders may be indicated in patients in whom an in utero or neonatal stroke is suspected as the cause of CP. Because CP is usually associated with a wide spectrum of developmental disorders, a multidisciplinary approach is most helpful in the assessment and treatment of such children.

The differential diagnosis must include disorders that may mimic the various types of CP. These may include the hereditary spastic diplegias monoamine transmitter disorders , and many treatable inborn errors of metabolism, including disorders of amino acids, creatine, fatty acid oxidation, lysosomes, mitochondria, organic acids, and vitamin cofactors