Now the child has

How to diagnose cp in infants?

What are the early signs of cp?

Head falls back when picked up while lying on back

Legs get stiff and cross or scissor when picked up

In a baby older than 6 months of age:

Doesn’t roll over in either direction

Has difficulty bringing hands to mouth

Reaches out with only one hand while keeping the other fisted

In a baby older than 10 months of age:

Scoots around on buttocks or hops on knees, but does not crawl on all fours

What are the functional classification?

The Gross Motor Function Classification System (GMFCS) is used to describe gross motor function, especially the ability to walk, for children from 2 to 18 years of age (19,20).

GMFCS is used to describe self-initiated movements as well as movements assisted by devices such as walkers, crutches, canes or wheelchairs (19,20).

The Manual Ability Classification System (MACS) is used to describe the typical use of both hands and upper extremities for children from 4 to 18 years of age (21).

The Communication Function Classification System (CFCS) is used to describe the ability of persons with CP for daily routine communication (sending or receiving a message) (22). The CFCS considers all methods of communication including vocalizations, manual signs, eye gaze, pictures, communication boards or speech generating devices (22).

What is general movement?

During term age and during the first 2months post-term,GMscommonly are referred to as writhing movements.They are characterized by small to-moderate amplitude and by slow-to moderate speed.Typically,theyare elliptical inform,which createsthe impression of a writhing quality[Hopkins andPrechtl,1984;PrechtlandHopkins, 1986;Cionietal.,1989;Prechtletal., 1997a,1997b].EMG recordings revealed thatcthe burstcduration was significantly longer during preterm GMs than during writhingmovements.However,burst amplitude values and tonic background data do not change from preterm GMs to writhing GMs

Fidgety movements are of small amplitude,moderate speed,and variable acceleration of neck,trunk,and limbs in all directions continually in the awake infant except during fussing and crying 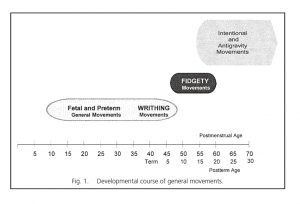 What are the MRI findings suggestive  of cp?

Cerebral palsy (CP) describes a group of permanent disorders of the development of movement and posture, causing activity limitation, that are attributed to nonprogressive disturbances that occurred in the developing fetal or infant brain. The motor disorders of cerebral palsy are often accompanied by disturbances of sensation, perception, cognition, communication, and behaviour, by epilepsy, and by secondary musculoskeletal problems.

What are the components of cp Classification?

A. NATURE AND TYPOLOGY OF THE MOTOR DISORDER: The observed tonal abnormalities assessed on examination (e.g. hypertonia, hypotonia) as well as the diagnosed movement disorders present, such as spasticity, ataxia, dystonia, athetosis.

B. FUNCTIONAL MOTOR ABILITIES: The extent to which the individual is limited in his or her motor function, including oromotor and speech function

. 2. Accompanying impairments The presence or absence of later-developing musculoskeletal problems and/or accompanying non-motor neurodevelopmental or sensory problems, such as seizures, hearing or vision impairments, or attentional, behavioral, communicative and/or cognitive deficits, and the extent to which impairments interact in individuals with cerebral palsy.

A. ANATOMIC DISTRIBUTION: The parts of the body (limbs, trunk, bulbar region, etc.) affected by motor impairments or limitations. B. NEURO-IMAGING FINDINGS: The neuroanatomic findings on CT or MRI imaging, such as ventricular enlargement, white matter loss or brain anomaly.

Whether there is a clearly identified cause, as is usually the case with post-natal CP (e.g. meningitis, head injury) or when brain malformations are present, and the presumed time frame during which the injury occurred, if known.

What are the clinical 4nfeatures? 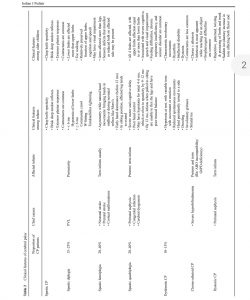 What are the associated problems? 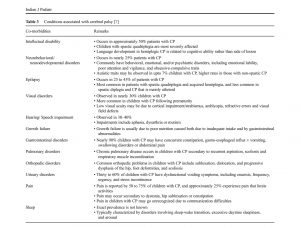 What are the investigation? 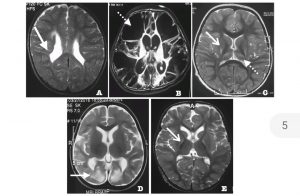 Panel A shows a T2 weighted image with periventricular hyperintensities and undulating ventricular margins (solid arrow). This is typically seen in prematurity associated insult and commonly manifests as spastic diplegia.

Panel B shows multi cystic encephalomalacia (dotted line with arrow). This pattern of watershed lesions is seen commonly in term infants with ischemia/ asphyxia and manifests clinically with spastic quadriplegia.

What is the role of physiotherapy?

Physical therapy (PT) is an integral part of CP management and may range from a regular exercise program to variety of modalities including electrical stimulation.

PT aids in encouraging caretakers to learn how best to handle, toilet, wash, and feed their children with CP and to promote posture, mobility, and transfer.

What is the role of occupational  therapy?

Occupational therapy (OT) techniques seek to improve function, but focus on maximizing a child’s ability to accomplish activities of daily living, education, and work. These are particularly helpful in maximizing available hand function.

Which all ot and pt methods are recommended?

The PT and OT based approaches which have been recommended in literature include [9]:

1. Bimanual training for hemiplegic CP where the child is trained to use bothhands togetherthrough repetitivetasks.

2. Constraint induced movement therapy involves restraint of the unaffected limb to encourage the use of affected limb during the therapeutic tasks. The restraint may be by the use of casting or physically restraining by holding the normal hand.

3. Context focused therapy involves changing the environment rather than the child’s approach.

how to manage spasticity?

Tone reduction may be considered if hypertonia or spasticity interferes with function, comfort, or care. But before venturing for tone reduction, it should be confirmed that the “increased tone” is not beneficial to the child; for example, some patients with severe lower extremity hypertonia use their heightened tone to “stand up” onotherwise weaklimbsand maylosetheir ability to stand and bear weight through their legs after treatment. Hence a team approach with pre-decided goals is essential.

Which all are the oral medications?

Oral antispasticity agents including benzodiazepines, baclofen and tizanidine have the advantage of ease of administration but the disadvantages of systemic effect and significant sideeffects [10, 11]. Thus, they are most appropriate for children with generalized spasticity, and/or in children in whom only mild tone reduction is needed. Unfortunately, the evidence on the efficacy of these agents is less rigorous. Hence, the choice of the agent ismoreamatterofpersonalexperiencerather than evidence-based medicine

Bind to GABAB receptors of laminae I − IV of the spinal cord, where primary sensory fibers end, thereby inhibiting the release of excitatory neurotransmitters and causing presynaptic inhibition of mono- and polysynaptic reflexes

Initial doses, titrated to effect (review treatment if no benefit within 6 wk):

Acts as a central α-2 receptor agonist at supraspinal and spinal levels to reduce spasticity by inhibition of spinal polysynaptic reflex activity.

Acts post-synaptically by binding toaspecificsiteof the gamma-aminobutyric acid A receptor (GABAA), enhancing the endogenous effects of GABA as an inhibitory neuro-transmitter

What is the role inj botox?

Botulinum toxin type A (BTX-A) when injected into the affected muscles, blocks the presynaptic release of acetylcholine from motor endplates of the lower motor neuron and decreases tone by limiting muscle contraction. Hence it produces chemodenervation.

The best evidence for use of BTX-A is for equines varus (treated by injections into the gastrocnemiussoleus muscles), but BTX-A is now used for a variety of focal indications including knee and hip flexion spasticity, and spasticity of the upper extremity.

Patients younger than 4 y old and without fixed contractures are expected to have the most favorable able response because the musculoskeletal and nervous system is most plastic in growing children [12].

Nonetheless, BTX-A also may be useful to treat focal dystonias in older children and adults.

The total dosage ceiling used by experienced injectors has risen from the initial recommendation of 4 U/kg to greater than 16 U/kg in specific specialist cases; but the dosing has to be individualized

Phenol and alcohol are the other agents associated with chemodenervation, and have been used in children with CP, although neither has been rigorously tested. Phenol is typically injected at a concentration of 3%–6% aqueous solution, whereas absolute alcohol is diluted to 30%–50%. The target nerve is identified with electrical stimulation, a procedure that may be poorly tolerated in children, making sedation or anesthesia necessary. The agent is injected perineurally, where it promotes denervation via axonal degeneration

What are the surgical therapies?

SDR is asurgical procedure that selectively divides parts of the dorsal lumbosacral roots of the spinal cord. This interrupts the afferent limb of the reflex arc on the sensory side, thus reducing spasticity without causing paralysis. This technique may provide a small gain in function.

Candidates for SDR are typically ambulatory or nearly ambulatory (GMFCS levels II and III, sometimesGMFCSlevelI),arebetween4and7yofage, have spared cognitive skills and are motivated to walk, have some degree of preserved selective motor control in the lower extremities, have adequate strength, and have minimal, if any, dystonia. In addition, the family must be able to commit to a rigorous daily physical therapy program for 6 to 12 mo [13].

Deep brain stimulation (DBS) is primarily used for dystonias. Ameta-analysis of DBS in adults with dyskinetic CP suggests that it may be effective [14]

How do you treat dystonia?

Anticholinergic agent works at the level of the basal ganglia

When to do orthopedic Interventions?

The nervous system matures around the age of 4 to 6 years when the physician can assess muscle imbalance more accurately; predict a functional prognosis; and make sure that no other abnormalities, such as athetosis or dystonia, are present.

Therefore, soft tissue procedures are generally performed between 4 and 7 years of age,

hand surgery between 6 and 12 years of age, and

bony procedures after 8 years of age although it is the needs of the child that determine the exact timing.

What is the role of assitive devices?

A child who has CP needs to move around, to explore his or her surroundings, and to interact with his or her peers so that his or her mental, social, and psychologic skills develop to the fullest.

A variety of mobility aids and wheelchairs provide differing degrees of mobility to these children.
Transfer aids, such as lift systems, assist the caregiver when performing transfers.

Some ambulatory children use gait aids, such as walkers, crutches, and canes, in addition to braces for efficient and safe ambulation.

Gait aids mainly used to improve balance also decrease energy expenditure, decrease the loads on the joints, and improve posture and pain. Nonambulatory children use wheelchairs for moving around. Wheelchairs must be properly fitted with seating aids, cushions, and other positioning components.

What is role advanced technology?

Augmentation technology where finger movements can drive the wheelchair ; ; ;

What is the role of treadmil training?

Treadmill training Treadmill training as an intervention for children with CP aims at improving balance as well as lower extremity symmetry (10,30,31,35,43-46). It provides important measures in developing an understanding of how to walk independently.