What are the common causes of fever with rash?

Measles is characterized by a distinct prodromal phase with fever, rhinorrhea, cough, and conjunctival congestion.

Koplik spots consisting of gray white sand‑like lesions with surrounding erythema in the buccal mucosa opposite the lower second molar tooth are pathognomonic. Erythematous, confluent, maculopapular rash develops usually on the fourth day of fever, beginning behind the ears and forehead and progressing downward.

The rash of rubella consists of minute, discrete macules, in contrast to the confluent rash of measles. The rash appears within 24 hours of onset prodromal symptoms, spreads rapidly from face to trunk and extremities and disappears altogether by the third day. Posterior cervical and postauricular lymphadenopathy, although not pathognomonic, is commonly seen.

On the other hand, the rash of varicella occurs in crops, which evolves through the stages of macule, papule, vesicle, and crusts involving mainly the trunk and proximal end of extremities [Figure 1]. Fever subsides 2–4 days after appearance of rash and the rash disappears after 3–7 days, leaving behind hypo‑ or hyperpigmented macules persisting for days to weeks.

In infectious mononucleosis, fever, pharyngeal inflammation, generalized lymphadenopathy, and hepatosplenomegaly are associated with a maculopapular rash which may take the form of erythema multiforme or urticaria. The exanthem occurs in 3–13% of cases and increases to 50% if treated with ampicillin or amoxicillin.

Children infected with HHV6 exhibit a sudden high fever lasting for 3–5 days. With cessation of fever, discrete macular or maculopapular rash erupt, known as exanthem subitum (ES), over neck and trunk which begins to disappear in a few hours. These children have a 10% risk of febrile convulsions

What is staphylococcal system?

Staphylococcal infections in children range from furuncles, carbuncles, folliculitis, bullous impetigo (which may or may not be associated with fever) to TSS and SSSS (which are associated with high temperatures). TSS is an acute multisystem disease characterized by high fever, vomiting, diarrhea, conjunctival congestion, strawberry tongue and diffuse, dark, and sunburn‑like rash. This is accompanied by altered sensorium, disseminated intravascular coagulation, and hypotension. Symptoms resolve by 7–10 days, associated with desquamation of palms and soles. SSSS affecting predominantly children below 5 years consists of a scarlatiniform erythema transforming into a wrinkled paper appearance with peeling of large sheets of epidermis. Healing occurs within 10–15 days without scarring.[16,60,61]

What is scarlet fever?

SF caused by GAS is characterized by a rash and strawberry tongue appearing 1–2 days after an upper respiratory tract infection. The rash is typically diffuse, erythematous, blanchable, and finely papular (like sandpaper) beginning around the neck spreading over trunk and extremities, sparing the face. The rash fades with desquamation after 3–4 days.[18,19] Erysipelas, also caused by GAS, is a well‑circumscribed, indurated, tender rash arising abruptly with high fever. Erythema marginatum is one of the major diagnostic criteria of acute RF, which is a nonsuppurative complication of prior GAS infection. The rash consists of erythematous, serpiginous, macular, nonpruritic rash with central pallor, primarily occurring over trunk and extremities, sparing the face.

What are the clinical features of sojia and kawasaki? 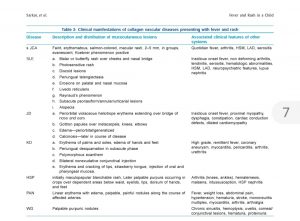 What are different types of rash? 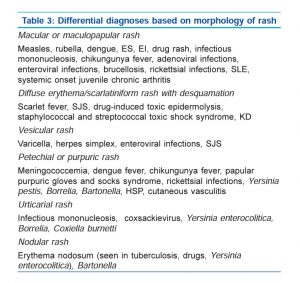 What are the d/d? 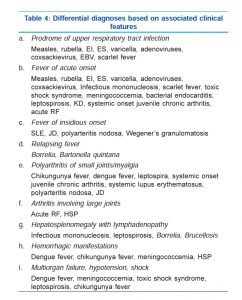