3 year old presents with easy bruising since 3 days. He had cold 1 wk ago. He is not on medication.he has no h/o trauma.

There is no family h/o bleeding disorder.he had circumcision at 3 months of age .

He is active playful. Bruises on trunk and limbs+,no pallor ,hepatosplenomegaly

1-4 wk after exposure to a common viral infection, an autoantibody directed against the platelet surface develops with resultant sudden onset of thrombocytopenia. A recent history of viral illness is described in 50–65% of children with ITP.

The peak age is 1-4 yr, although the age ranges from early in infancy to elderly. In childhood, males and females are equally affected. ITP seems to occur more often in late winter and spring after the peak season of viral respiratory illness.

How do you develop ITP?

T he exact antigenic target for most such antibodies in most cases of childhood acute ITP remains undetermined, although in chronic ITP many patients demonstrate antibodies against αIIb-β3 and GPIb. After binding of the antibody to the platelet surface, circulating antibody-coated platelets are recognized by the Fc receptor on splenic macrophages, ingested, and destroyed.

Most common viruses have been described in association with ITP, including Epstein-Barr virus   and HIV . EBV-related ITP is usually of short duration and follows the course of infectious mononucleosis. HIV-associated ITP is usually chronic. In some patients, ITP appears to arise in children infected with Helicobacter pylori or rarely following vaccines.

WHAT are the clinical features?

T he classic presentation of ITP is a previously healthy 1-4 yr old child who has sudden onset of generalized petechiae and purpura. The parents often state that the child was fine yesterday and now is covered with bruises and purple dots. There may be bleeding from the gums and mucous membranes, particularly with profound thrombocytopenia (platelet count <10 × 109/L). There is a history of a preceding viral infection 1-4 wk before the onset of thrombocytopenia. Findings on physical examination are normal, other than petechiae and purpura. Splenomegaly, lymphadenopathy, bone pain, and pallor are rare. A

How do you assess severity?

A simple classification system from the United Kingdom has been proposed to characterize the severity of bleeding in ITP on the basis of symptoms and signs rather than platelet count, as follows:

When should we think about alternate diagnosis?

T he presence of abnormal findings such as hepatosplenomegaly, bone or joint pain, remarkable lymphadenopathy other cytopenias, or congenital anomalies suggests other diagnoses (leukemia, syndromes). When the onset is insidious, especially in an adolescent, chronic ITP or the possibility of a systemic illness, such as systemic lupus erythematosus (SLE), is more likely.

How do you investigate?

Severe thrombocytopenia (platelet count <20 × 109/L) is common, and platelet size is normal or increased, reflective of increased platelet turnover . In acute ITP the hemoglobin value, white blood cell (WBC) count, and differential count should be normal. Hemoglobin may be decreased if there have been profuse nosebleeds (epistaxis) or menorrhagia.

Bone marrow examination is not necessary in simple ITP

Bone marrow examination shows normal granulocytic and erythrocytic series, with characteristically normal or increased numbers of megakaryocytes. Some of the megakaryocytes may appear to be immature and reflect increased platelet turnover.

Indications for bone marrow aspiration/biopsy include an abnormal WBC count or differential or unexplained anemia, as well as history and physical examination f indings suggestive of a bone marrow failure syndrome or malignancy. Other laboratory tests should be performed as indicated by the history and examination.

Platelet antibody testing is seldom useful in acute ITP. A direct antiglobulin test (Coombs) should be done if there is unexplained anemia, to rule out Evans syndrome (autoimmune hemolytic anemia and thrombocytopenia)

An ANA should be considered in adolescents, especially with other features of SLE

How do you treat?

1. No therapy other than education and counseling of the family and patient for patients with minimal, mild, and moderate symptoms, as defined earlier. This approach emphasizes the usually benign nature of ITP and avoids the therapeutic roller coaster that ensues once interventional therapy is begun. This approach is much less costly, and side effects are minimal. Observation is recommended by the American Society of Hematology guidelines for children with only mild bleeding symptoms such as bruising or petechiae.

2. Treatment with either IVIG or corticosteroids, particularly for children who present with mucocutaneous bleeding. As American Society of Hematology guidelines state, “A single dose of IVIG [intravenous immune globulin] (0.8-1.0 g/kg) or a short course of corticosteroids should be used as first-line treatment.” IVIG at a dose of 0.8-1.0 g/ kg/day for 1-2 days induces a rapid rise in platelet count (usually >20 × 109/L) in 95% of patients within 48 hr. IVIG appears to induce a response by downregulating Fc-mediated phagocytosis of antibodycoated platelets. IVIG therapy is both expensive and time-consuming to administer. Additionally, after infusion, there is a high frequency of headaches and vomiting, suggestive of IVIG-induced aseptic meningitis. 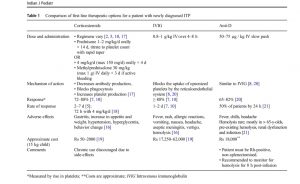 What are the new terminologies IN ITP?

Itp is a self limiting disease

Only a few get severe bleeding especially those with mucosal bleeding

Persistent chronicity happens in about 20%

With these agents role of splenectomy is extremely limited

Which is age group for ITP

The proposed aetiology for ITP include

Is it early response?

Is it initial response?

Is it durable response?

He is now on 10 mg steroid daily

What is it called?